Between high energy costs (which are expected to keep rising) and the uncertainty in the world today, the idea of going “off-grid” is gaining popularity. Preppers aren’t the only ones who are thinking in these terms, as others are seeing the potential benefits of getting off-grid and not having to pay their monthly utility bills.
Those that do end up saving a bundle on their monthly budget, as well as gaining the security of not having to depend upon our aging infrastructure.
Of course, going off-grid has different meanings to different people. Some merely think of it as becoming self-sufficient in energy requirements, while other think of totally eliminating their dependency on utility services and becoming self-sufficient in all areas of life.
A lot of this depends on where a home is located, as it has always been much easier and more acceptable to have an off-grid lifestyle if one is living in a rural environment, rather than an urban one. Farmers have always been somewhat self-sufficient, so it’s no surprise when they pull the plug.
Going off-grid is a major project which requires lots of planning and preparation. Making the transition to living off-grid isn’t easy for any of us, especially if our home isn’t designed and built for it. While it is possible to convert pretty much any home to an off-grid home, it is much easier for a home that was designed with that in mind.

Electrical Power
For most people, the biggest consideration is electrical power. We are a society that is driven by electricity.
Pretty much everything we do requires the use of electricity in one way or another.
While it is possible to forgo electricity and return to the ways of our great-grandparents, most of us don’t really want to do that. While we want to go off-grid, we still want our modern conveniences.
Basically, there are two different attitudes we can have about electricity. Either we can adopt the idea of living without electricity all together and returning to the ways of the 1800s, or we can reduce our electrical consumption, so that we can live off of the electricity that we produce ourselves with our own power generating equipment.
With that in mind, the first thing to do is to design a home that is energy efficient in all ways. The more energy efficient it is, the less energy that we need to create.
So, what are the biggest energy users in the average home?

If we look at that list, we can find lots of ways of reducing electrical usage. For example, building an underground home with passive solar heating will go a long way towards reducing both heating and cooling costs. While we’re working on solar, we can also put in a solar hot water heater and eliminate the electricity we’re spending on that.
Watch Video – Learn ultimate survival techniques from The Lost Ways 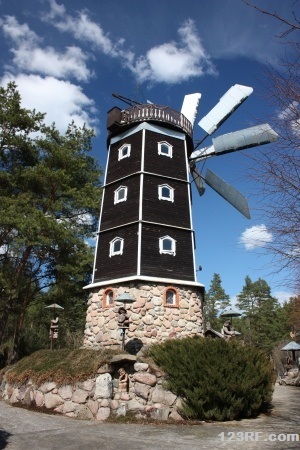 The second area we might want to look at is the kitchen. Three of our top energy users are in the kitchen; the refrigerator, the stove and the microwave oven. While refrigeration may be difficult to do without, we can easily eliminate the electric range and microwave, cooking over gas or wood.
While it won’t totally eliminate the refrigerator, it’s possible to get away from much of our dependency on refrigeration by building a root cellar. That can pretty much replace most of our use for the refrigerator.
A deep freeze for the frozen food will save money as well, as they are more energy efficient, especially if it is installed in the already cool root cellar. Of course, we want to make sure that we buy the most energy efficient model we can.
A clothes dryer is an unnecessary luxury, as clothing dries just fine when it is hung out on the line. We’ve gotten used to using a clothes dryer, simply because it saves us from having to walk outside to hang up the clothes and take them back down again.
The two most common means of producing electricity for an off-grid home are solar and wind. I would recommend using both, unless you are living in an area where one of them won’t work at all.
Some places don’t have enough wind to operate a wind generator, making it a waste of money to buy one. Always use a battery backup system with any power generation you do at home, so that you can have electrical power even in those times when your system can’t produce any.

Water
The second major area to consider is water and sewage; or we could say incoming and outgoing water. Water is essential for survival, so we can’t just say that we won’t use any. However, we can reduce the amount of water that we use.
The average American household uses 100 gallons of water per person per day. Of that, about 30% is used for watering the lawn, 25% for flushing the toilet, 17% for bathing and 37% for other cleaning.
By comparison, the average African family uses 5 gallons of water per person per day. While I don’t think that we all want to change our lifestyles that drastically, I think it’s safe to say that we aren’t all that efficient in our water usage.
By putting in water efficient appliances and learning water efficient ways of doing things, we can greatly reduce our water consumption, without having to make major lifestyle changes. That will allow us to use our off-grid water much more efficiently, reducing our risk of running out of water.
There are only two basic off-grid ways of getting water; from a stream or from a well. Since most of us don’t have a stream on our property, that means drilling a well. The nice thing about having a well is that if it is properly drilled, you’ll always have a good source of water. You can augment this by putting in a rainwater collection system. Click here and watch this video for more info.
Sewage
The other problem is getting rid of the waste water from our homes. If you have a septic system, you’re already off-grid in that regard. However, if you don’t have a septic tank, there are still ways of going off-grid with your water disposal.
First of all, your waste water can be divided into two parts; grey water and black water. The grey water is the waste water from your bathtubs, showers and sinks. This doesn’t necessarily have to be disposed of; it can be used for flushing toilets and watering your garden. By using it in this manner, you’ll reduce your overall water consumption.
That leaves the black water to take care of. The best and easiest way of making use of this is to put in a composting toilet or to capture this waste and put it into your compost bin, composting it along with your kitchen scraps, weeds and grass clippings. In this way, the waste becomes fertilizer to help your vegetable garden grow better next year. Click here and watch this video for more info.
Conclusion
While all that may seem like a lot of work, it’s doable. The average person with some basic carpentry and mechanical skills can do all of that themselves, making their home energy and water efficient and making it possible to go totally off the grid.
Don’t try to go off-grid without making your home more efficient, you’ll wear yourself out trying. Start with making things more efficient and then work on generating your own power and water.
That way, you’ll be able to make the conversion much more effectively and efficiently. The high cost of energy and water efficient appliances will be more than offset by the savings you will have in installing your energy producing equipment. Less energy needs means a smaller, less expensive system.
I highly recommend you to watch this free survival video that reveals 3 of the most important skills to overcome any disaster.

by Bill White for survivopedia