The United States health care system has been under severe scrutiny for years now. According to the Centers for Disease Control and Prevention, diabetes kills more than 80,000 Americans every year. When access to health care is a commodity rather than a human right, prices fluctuate accordingly. And so now, people are going to Canada to get a fair price.

According to Newsweek, a self-dubbed “caravan” of Americans with Type 1 diabetes crossed into Canada earlier this month. Desperate for affordable medicine, the 600-mile trek from the Twin Cities to Ontario and back made more financial sense than purchasing insulin domestically.

Quinn Nystrom, a caravan member and diabetes advocate who has health insurance via the Affordable Care Act, says insulin in Canada costs one-tenth the U.S. price.

“We’re on a #CaravanToCanada because the USA charges astronomical prices for insulin that most people can’t afford,” Nystrom tweeted, as the band of resourceful citizens began their journey to take financial control into their own hands.

The caravan made the 600-mile journey from the Twin Cities to Ontario. One member made the trip on behalf of her 13-year-old daughter.

This group of activists promoted their campaign with the #Insulin4All hashtag on Twitter. The way they see it, no one should have to choose between dying and paying for their medicine.

Since the mid-1990s, insulin costs for Americans have increased well over 1,000 percent. According to STAT, while 15 years ago a vial of insulin might have cost $175, today that same vial costs nearly $1,500. Rep. Elijah Cummings (D-M.D.) recently ordered the release of a report that stated millions of U.S. citizens who needed insulin were paying up to 92 percent more than patients in other countries. The way a lot of people with diabetes — or a conscience — see it, we’re in a drug price crisis. And that’s what inspired the #CaravanToCanada.

The caravan’s mission was merely to kill two birds with one stone — buying the medicine they need to survive without breaking the bank and promoting awareness for this nationwide issue online.

The group posted a photo of a Walgreens pharmacy during their drive, to underline just how glaring this problem really is.

We could’ve ended our #CaravanToCanada in 5 minutes, but unfortunately they charge $300 for insulin. So we will travel another 5 hours north so we will only have to pay $30 for a vial of Insulin. #MNinsulin4all #insulin4all #americawehaveaproblem #makeinsulinaffordableagain pic.twitter.com/JRvU8dMj7I

As satirical as some of the group’s comments may be, this is no laughing matter for caravan member Lija Greenseid. She joined the effort on behalf of her 13-year-old daughter, who has Type 1 diabetes.

It was only during a family vacation in Canada three years ago that she was confronted by the stark differences in price. The Greenseids noticed this disparity on a grander scale, as well, while traveling to other corners of the world, and could no longer idly sit by.

Greenseid explained that five insulin pens might cost $700 in the U.S., while the same amount can be bought for a mere $65 in Canada. In Italy, $61. Greece, $51. And in Taiwan, it costs only $40. The price itself wasn’t the only benefit of acquiring the drug in Canada, though. Access to it was a breeze. 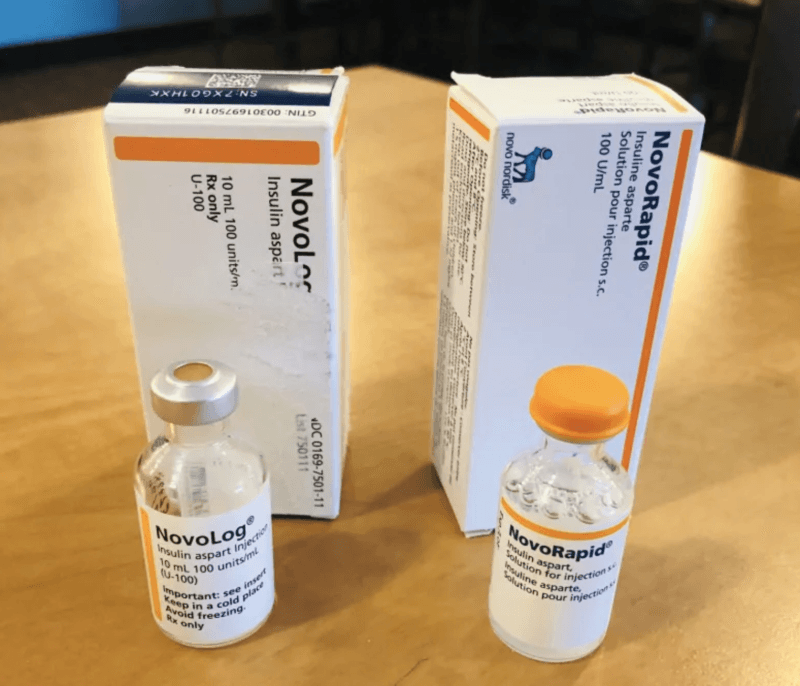 Twitter/Quinn NystromNystrom’s NovoLog insulin costs her $300 for one vial in the U.S. The Canadian NovoRapid alternative costs $30.

“This year it took me 15 phone calls to a variety of parts of the healthcare system over 11 days before I could get my daughter’s insulin refilled,” she said. “But in Canada, you just walk in and you buy it….It definitely illustrated for me how wrong it is that we’re paying the prices we’re paying.”

According to CBC, Greenseid said her family spent $13,000 just for health insurance, plus $14,000 out of pocket, while they waited for their insurer to cover the cost of her daughter’s insulin.

“It’s a huge amount of money for us,” she said. “Because of that, we didn’t put any money into our kids’ college savings accounts or put anything into retirement for the year. We really just had to pay our health-care bills….So now you can see why we do crazy things like go across the border and buy insulin.”

Why? Because in Canada, the government negotiates and regulates the price of drugs to ensure they are affordable for all.

Why don’t we do that here in the US? #insulin4all pic.twitter.com/WxzQ9vuiJQ

Greenseid admits “it’s a little crazy to rely on another country” for affordable drugs, and that traveling to Canada every time her daughter needs insulin is “obviously not the solution to this problem.”

The White House yesterday announced new rules requiring pharmaceutical companies to list drug prices in TV ads, hoping that will incentivize them to keep their costs down. But many are skeptical that that will actually help.

“It’s really a matter of making broader changes to the system,” says Greenseid.

Amid rising anger over the cost of insulin, a new analysis underscores the extent to which the diabetes medicine is hurting American pocketbooks: Between 2012 and 2018, spending on insulin by each person with diabetes tripled, yet usage during that time remain essentially flat.

Specifically, individuals with Type 1 diabetes spent $9,705 on insulin in 2018, up from $2,864 in 2012, while the average daily insulin use rose just 3 percent, according to the Health Care Cost Institute, which analyzed about 15,000 claims from three large insurers — UnitedHealth (UNH), Cigna (CI), and Humana (HUM) — for each person who had at least one prescription for insulin.

I highly recommend this book to everyone. 300 pages, color, paperback. The Lost Book of Remedies is helping Americans achieve medical self-sufficiency even in the darkest times using the time-tested methods of our grandparents without spending lots of money on toxic drugs and without side effects. A great asset when doctors and hospitals won’t be available anymore. You may not be Claude Davis, but you can make use of his procedures and techniques to increase your chances of survival!